Alumni from the last five decades are coming together with the current crop to show all that is special about Leeds Youth Opera. Leeds Youth Opera offers young people in Leeds a unique opportunity to work with industry professionals on fully staged productions whilst learning about many forms of serious musical theatre. The company normally performs two works per year, in February and July. Past shows range from the classics of Mozart, Puccini, and Verdi, through modern works by Phillip Glass, to the musical theatre classics of Sondheim and Bernstein.

A Weekend in the Country | A Little Night Music | Sondheim

Our Time | Merrily We Roll Along | Sondheim

John studied musicology at undergraduate and postgraduate level at the University of Leeds and has since worked with many of West Yorkshire’s local ensembles as a conductor, musical director, violinist, choral singer, arranger and composer. He currently works full time for Sheffield City Council’s music education service, conducts the Leeds Camerata which he founded, and conducts Leeds Symphony Orchestra, alongside his role as Music Director for Leeds Youth Opera.

Rosie has worked with Leeds Youth Opera for nearly three years, and she is thrilled to be directing the world premiere of ARC23 for the company’s 50th Anniversary Celebrations. She studied MA Opera Directing at RWCMD and has worked as an assistant director with Welsh National Opera, British Youth Opera, Northern Opera Group, and Cumbria Opera Group. She has also undertaken observerships at the Royal Opera House, Opera North, and Birmingham Opera Company. Rosie first worked with Leeds Youth Opera in 2019, assisting on their production of Don Giovanni.

Jonathan is a freelance musician based in Leeds. He has been involved with Leeds Youth Opera in various roles since the 2015-2016 season and was the Music Director of the Leeds Gilbert and Sullivan Society from 2016-2019. Jonathan has worked as an accompanist with Northern Ballet since 2017, as a freelance education repetiteur with Opera North since 2016, and was the repetiteur for several operas with the West Yorkshire Symphony Orchestra from 2018-2020. 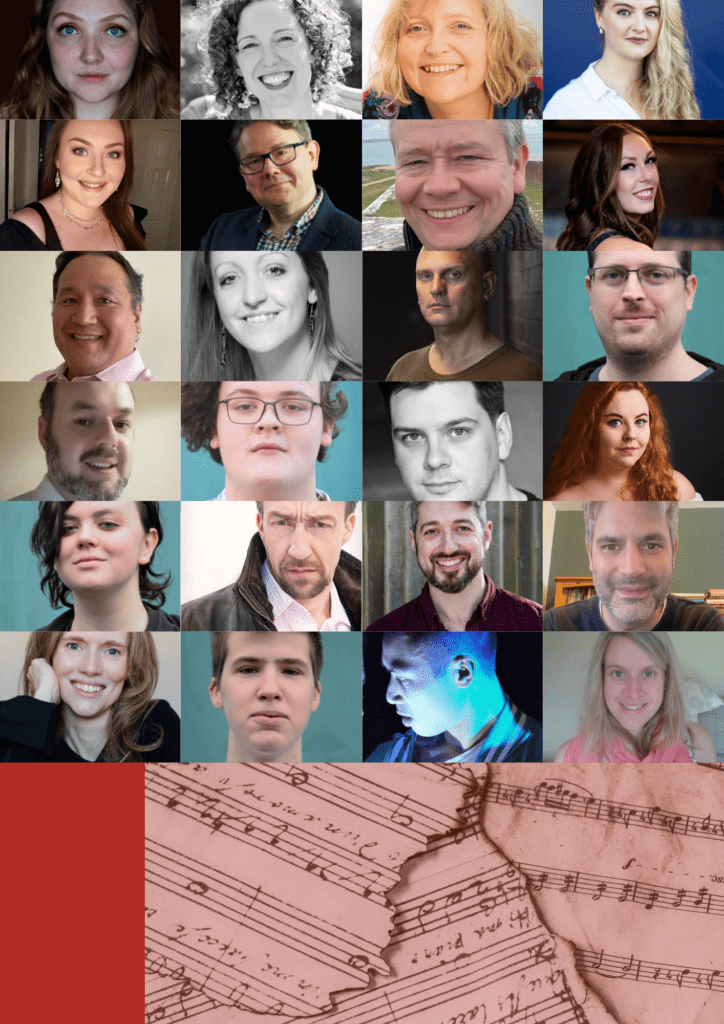 Emma is a singer and actress from Leeds who graduated from the University of Nottingham, achieving a BA (Hons) degree in Music with a 2:1. Genres include: Classical, Opera, Musical Theatre, Jazz, Pop and Choral singing. In the past, Emma has also been a Musical Director/ Conductor and Vocal Coach.

Matthew started singing in 1995 at Blackburn Cathedral, moving to and staying in Leeds from 2005 to further his studies. This is his twelfth production with the society; unable to decide if he is an old man (The Duke in Patience, Maraczeck in She Loves Me) or a teenager (Jack in Into The Woods). For work, Matthew writes music and flies across the western world selling graphic novels about the post-apocalypse.

Member of LYO between 1996 and 2005. Productions include Into The Woods, Faust, Martha, Gianni da Calais, Satyagraha, Peter Grimes, Candide, A Masked Ball, Merrily We Roll Along, Turandot, The Pearl Fishers, The Voyage, and The Tales of Hoffman.

Victoria’s passion for singing started at a young age when she performed with several amateur dramatic societies and joined Barnsley Youth Choir. Since then, she has undertaken a BA in Music at The University of York and Postgraduate Diploma in Music also at the University of York. Since finishing University at the end of 2019, Victoria has taken part in several masterclasses and has sung weekly on a performance platform, held by Rocket Opera in 2020. She joined Leeds Youth Opera at the end of 2019 where she was cast as the understudy, portraying ‘Donna Elvira’ in Mozart’s Don Giovanni and has since been cast as ‘The First Lady’ in The Magic Flute during the Pandemic, and ‘The Old Woman’ in The Enchanted Pig.

Lucie joined LYO aged 9 and gradually roped in the whole family. Her parents, Kate and Martin Shaw, were hugely involved with the group during Lucie’s membership from 1986 to 1995. Lucie is really excited to join the ensemble for this alumni concert and feels like a big kid all over again. Lucie lives in rural North Lincolnshire with her lovely husband and fabulous daughter and sings with the St Cecilia Singers.

Tom was a member of Leeds Youth Opera for most of the nineties; giving him a life-long love of opera and singing as well as some life-long friends and many treasured memories. Tom is very grateful for the dedication, expertise and patience of Mike Williamson and Jonathan Clift and to the adults who volunteered their time to help out; they created magic! It is wonderful to see that the group is thriving after 50 years, here’s to 500 more!

Richard performed in 15 LYO shows joining for Carmen (2000). Richard adored jumping styles from Sondheim to Britten to Verdi to Glass to Puccini and beyond. Since LYO he has continued to perform. Highlights include playing the eponymous hero in The Marriage Of Figaro, The Judge in Sweeney Todd at the Leeds Playhouse, and Old Deuteronomy in Cats at The Leeds Grand. Richard is now a stalwart for Leeds Gilbert & Sullivan Society. Richard is a Management Training Coach & Consultant specializing in advanced presentation skills.

Karl hails originally from London, but has been Yorkshire based for over 20 years. His association with LYO goes back to 2000 playing the role of Dancairo in Carmen. Over the following 10 or so years, with a number of attempts at retirement, Karl not only stretched the definition of “youth” but broadened his repertoire performing key Tenor roles with LYO, most notably Calaf(Turandot), Hoffman(Tales of Hoffman), Candide(Candide), Tamino (Magic Flute), Faust (Faust) and Lensky (Eugene Onegin) to name a few. Karl continues to sing in Yorkshire and is delighted to be joining in the celebrations this evening.

Genny has been a pivotal member of LYO for many years and has performed in a number of productions, from Strauss’ Die Fledermaus, to a mad scientist in Mozart’s Don Giovanni. This year, Genny performed as the Book of Fate in Dove’s The Enchanted Pig, and will be a crew member in next week’s premiere of ARC23.

Alastair joined Leeds Youth Opera in Sept 1990 for the production of La Vie Parisienne. As an 11-year-old, he had no idea what an impact the group would have on his life. For the next 8 years (and 16 productions) being a member of this unique group gained him the opportunity to be part of some magical shows, make friends for life and direct his passion of the arts to pursue a career in acting. It may have been a while since he sang opera, but he’s thrilled to be part of the chorus tonight to celebrate 50 years of this special group.

William has been a member of Leeds Youth Opera for many years, first appearing in Les Misérables (as two Minor Characters) in 2017. Since then he has appeared in a Masked Ball, La Bohème (child), In our Element, Macbeth (Fleance), Die Fledermaus, Don Giovanni, and most recently as the King of the West in Dove’s The Enchanted Pig. Among other subjects, William is studying music at A-level and is hoping to go to a university with a flourishing opera society. As well as singing, William plays a couple other instruments including French Horn with the City of Leeds Youth Orchestra, and is heavily involved in lots of musical activities at school.

Stephen sang with Leeds Youth Opera in the 1990’s before studying at the Royal Northern College of Music, during which time he sang in roles including Guilelmo (Cosi fan tutte), Escamillio (Carmen) and Balstrode (Peter Grimes). He now works as a software engineer in bioinformatics whilst singing for local companies in Oxfordshire including Opera Anywhere, Oxford Operatic Society and Abingdon Operatic Society. Stephen is developing his skills as a musical director, directing Singing in the Rain in 2018 and All Shook Up in 2021. His recent roles include Juan Peron (Evita), Max Von Mayerling (Sunset Boulevard) and The Judge (Sweeney Todd).

Leon was a member of LYO from 2005 to 2009, and did a variety of tenor roles in that time, including Max Der Freischütz, the Prince Love For Three Oranges, Prince Charming Cendrillon, and The Student in the premier of The Nightingale And The Rose. After leaving LYO he did a few roles with West Riding Opera, and the tenor roles in all the G&S operettas, with societies throughout Yorkshire. Leon has also composed an opera with Jonathan Clift, an adaptation of Shakespeare’s The Winter’s Tale. Leon currently plays bass and sings with Leeds-based metal band All I Live For.

Alexandra was a member of Leeds Youth Opera between 1995 and 1997, singing in Sondheim’s Into The Woods (taking the role of one of the ugly sisters) (1996), Gounod’s Faust (1996), Flotow’s Marta (1997) and the modern premier of Gianni da Calais by Gaetano Donizetti (1997). After university, Alexandra rejoined briefly to sing in Bernstein’s Candide (2002), and has continued to perform in various chamber and church choirs and music groups both in the UK and in Luxembourg where she now lives.

James is delighted to return for this 50th Anniversary gala and to perform as Carl-Magnus in tonight’s opening number. He previously performed as Masetto in LYO’s 2020 production of Mozart’s Don Giovanni. Currently, James sing with my local churches in Grimsby to develop his musical abilities, which will be taken further within the near future with upcoming performances.

Born and raised in Leeds, Beth is a recent Young Artist for the Opéra National de Lyon, Les Azuriales Festival and a ENOA/Britten Pears Scholar having completed her studies at the National Opera Studio. Previously, Beth gained an Artist Diploma from the Royal College of Music’s International Opera School where she studied with Dinah Harris and a Masters (Distinction) from the Royal Academy of Music where she studied with Catherine Wyn Rogers.

Emily Doreen Atkinson (soprano) graduated from Leeds Conservatoire in 2020 under the tutelage of Geraldine Cassidy. In 2020 she joined LYO for an online masterclass alongside Martin Pickard and has been happily active in the company ever since, performing in The Enchanted Pig and next week in ARC23! Outside LYO, she’s received accolades from the Yorkshire Philharmonic Choir, performed at an Emerging Artist event for Opera North and trained at Mozarteum Sommerakademie. Soloist engagements include the Leodian Concert Orchestra, YPC, Waldershelf Singers, Bel Canto choir and others. Moreover she is the Musical Director of Masbrough Community Choir. She’s very excited to be undertaking a Masters at the Wales International Academy of Voice in September!

Amy was a member of LYO from February 2003- February 2007. She performed in Merrily we roll along, Turandot, The Pearl Fishers, The Voyage, thecTales of Hoffman, The Magic Flute, Cinderella, Sweeney Todd and the Love for Three Oranges.

Soon after graduating from the University of Leeds with degrees in physics, Julian accidentally went to the opera and shortly after was introduced to LYO by his great friend Sarah Estill. It was an event that changed his life. The incredible thrill of music and drama took over his life. He has sung in many of the world’s great opera houses including Covent Garden, Bayreuth Festspiel, English and Welsh National opera’s, Dutch, Chicago, Teatro Colon Argentina, and now spends most of the seasons at the Metropolitan Opera in New York. Broadcasts for the BBC and most importantly, sang on The Revenge of the Sith. He loves singing Wagner roles, villains, assassins and kings.

Andrew is a tenor, having previously performed with North Wales Opera Studio, Polaris Opera, York Opera, and of course, LYO. Previous roles include Don José in Carmen and Alfred in Die Fledermaus.

Huge thanks to the players of Leeds Symphony Orchestra and other musician friends of LYO who have provided amazing accompaniment this evening.